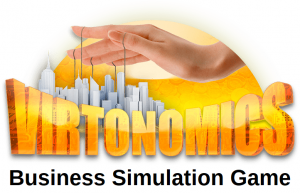 Retail Stores are at the end of production chain. Profit of the stores is the basically profit of all subdivisions, which take part in production process. Retail Trade is one of the most complicated to manage and unstable activities, but the most profitable.

In Virtonomics players have to compete not only with other players but also with local suppliers. These are retail enterprises represent a mass of various store in the city and originally they are in full control of retail market.

In most cases, to compete with local suppliers successfully you must offer goods of higher quality at lower price. Terms of local suppliers always change as market of a certain goods grows, local suppliers decrease their price and improve quality, and competition in this sector becomes more severe.

Wealth Level is the most important factor to define customer preferences. In cities with low wealth level people spend almost all their money on most needed goods, and they have no big interest in luxury goods. They pay special attention to the price as they prefer buying cheaper products instead of famous and high-quality goods.

While, in cities with higher wealth level people can afford buying household equipment, cars and jewelry. In their opinion, high quality is more important than low price. Wealthy customers first of all require good service.

Customers preferences often change in favor of one or other goods. For example, sudden growth in a certain city in household electronics sale can be observed, but one virtual year later this sector can come to complete stagnation, while customers will start to buy furniture and jewelry. These changes can often be unpredictable however marketing research can reveal consumer trends.

The attractiveness of a certain product is calculated on basis of 3 main characteristics: price, quality and brand. The following factors also include evaluation of store's attractiveness: number of customers, service level and store's location. This dimensionless indicator is determined by the level of supply of local suppliers, on its basis a conditional volume of possible sales is formed. And then competition mechanisms come into force, which are described below.

Sale of franchise, non-franchise and TM-products is based on principle of diminishing returns. It is considered that commercial offer is united (for example, all sorts of cars are one offer, which is a Car), but in case if there are franchise or TM-products in the store, then overall sales volume will be increased by 25%. With the same attractiveness of varieties of one proposal (brand, quality, price), preference is not given to any of them.

If your company has several stores with similar goods, you should use sales modifier, which is related to the uniqueness of the stores. It means that customers would prefer stores with unique assortment of goods.

There are two kinds of retail markets in Virtonomics: saturated and unsaturated. Segment of local suppliers in saturated markets is always zero.

In unsaturated market all sales are determined by the attractiveness of supply (combination of price, quality and brand).

Redistribution of sales in saturated markets has two stages: competitive and proportional. During the competitive stage sales volume depends on attractiveness of the offer, and during the proportional stage all stores are equal. Percent of each stage depends on the city and on the goods: for high-developed cities (and for luxury goods) competition is more significant.

There are three basic stages of market saturation:

Stores will compete with each other depending on their location. It means that stores located in a district with high concentration of stores will have bigger penalty. The system will calculate how much goods would have been sold by all these stores and after this sales volume for certain stores will be decreased. It is not the number of stores in the area that is important, but their total sales, i.e. one store measuring 100 000 m2 can have a greater impact than 10 small stores.

This parameter is valid only for one company and in only one city. It expresses the conformity of your goods. Stores of your competitors and your own stores in one city do not influence the uniqueness of stores in other cities.

Two parameters are important in defining the uniqueness: variety of goods and conformity of assortment. Manufacturer of goods in one store will be compared to the manufacturer of goods in another store and in case if they are the same — you will have to pay a penalty for non-uniqueness. For instance, 3 stores with identical assortment produced by same manufacturer will have 50% uniqueness. Penalty will be applied only for the third store and up: it is possible to have two identical stores in one city but if you have more than two their uniqueness will go down. If the number of such stores will increase, uniqueness will fall further. As a result, the turnover of 10 completely identical stores will be only 4 times more than one.

About restrictions per visitor. One buyer of a unique store with one product section can buy, for example, clothes:

These are approximate values only for the reference. 50 units refers to the goods of highest quality and brand sold in the store with the best service level. In this situation the store plays a role of a super-popular boutique which has few very rich customers. In case with unsaturated markets this value can be much higher especially for big stores.